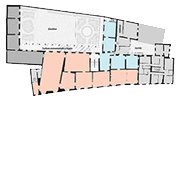 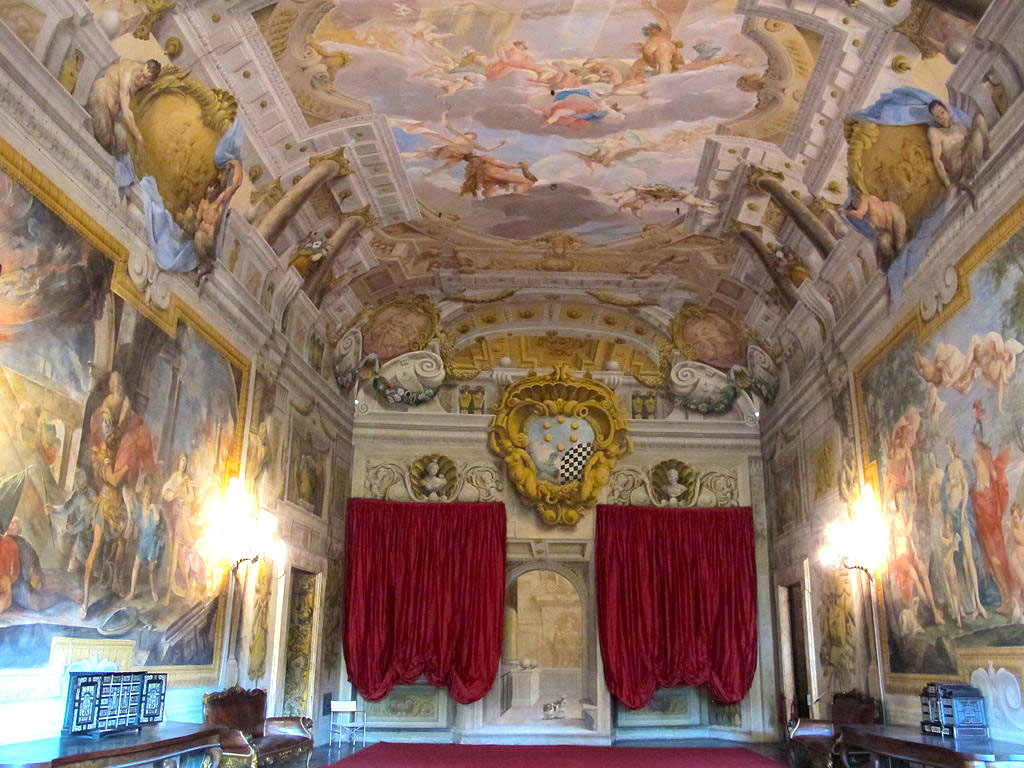 The First Floor, or Piano Nobile, represents the Museum’s main draw. It is accessed via a staircase that leads into the late-18 -century New Gallery, also known as mirror gallery, built by Luccan architect Stefano Tofanelli who designed the doors, the furniture and the stucco decorations on the ceilings and walls.

The following hall, known as  Music Room, achieved in the late 17 th century, is still equipped with a carved wood stage for the orchestra. The frescoes on the walls, by Bolognese artist Giovan Gioseffo Dal Sole, depict mythological and epic themes, while, for the ceiling, Marcantonio Chiarini invented a solid “fake architecture”  that enhances the height of the room. The Music Room marks the beginning of the suite of four sumptuous  Camere di parata (Formal chambers) and the Alcove, which are part of the systematic decoration project conceived by Chiarini with Giovanni Maria Ciocchi, who painted the allegorical scenes on the ceiling (Earth, Air, Water, Fire), one for each room. The walls of the chambers are furnished and decorated according to an original arrangement due to a 19th century  intervention by Raffaele Mansi Orsetti who covered the walls with a complete cycle of eighteen beautiful 17 -century Flemish tapestries depicting Stories of the Emperor Aurelianus and Zenobia, queen of Palmyra.

The visually stunning Alcove room, arranged in 1688, is introduced and protect- ed by a spectacular serliana in carved and gilded wood. The ceiling is decorated with a painting of Cupid and Psyche, while the fabrics covering the walls and the th “a dossello” bed are sumptuously decorated with silk embroideries: a highly interesting and rare artifact both in terms of quality and state of preservation. The less sumptuous rooms located in the west wing of the palace are where the family  members used to live their everyday lives. These Private apartments are made up of an antechamber, that houses the only surviving paintings of the Mansi’s rich collection (Ferdinand Bol’s Sacrifice of Isaac), and of other rooms furnished with Luccan pieces of furniture (17 th -19 century) and paintings (Pietro Paolini, Mario dei Fiori, Simone del Tintore) acquired by or donated to the Museum after it was sold to the State.