Bourgeois clients between the 19th and the 20th century 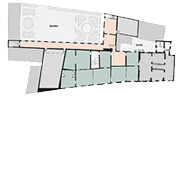 The 19th -20th century art section is introduced by some works still tied to the classical  tradition such as those by Bernardino Nocchi, Pompeo Batoni and Stefano Tofanelli, a court painter for Elisa Bonaparte, up to Michele Ridolfi’s purist experimentations.

The following room, known as “Princes’ Hall”, holds a series of portraits of the Luccan sovereigns starting from 1805, the year when Elisa Baciocchi, Napoleon’s sister, was appointed princess of Lucca and Piombino. In the following rooms are paintings dealing with historical and literary subjects, such as Edoardo  Gelli and Michele Marcucci’s works, depicting episodes of Roman history, and Norfini’s history paintings. After the “Savoy Room”, with portraits of the first Kings of Italy ( Victor Emmanuel II and Umberto I at the manoeuvres), the exhibition continues  with some exquisite 20 th th -century portraits, two of which (by Edoardo Gelli and Luigi De Servi) represent Giacomo Puccini. The recently rearranged hallway houses a wide selection of paintings, plasters, bronzes and terracottas dating back to between the late 19 century and the mid-20 th th , made by local artists such as sculptors Augusto Passaglia, Alfredo Angeloni  and Giuseppe Baccelli and painters Lorenzo Viani, Gabriella Cristiani, Giuseppe Ardinghi, Alfredo Meschi.